For patients and physicians alike, it may feel like we’re bombarded with flu warnings from all sides, especially after the brutal 2017-2018 flu season. Walk into almost any drug store or grocery store and you’ll see signs advertising that flu shots are available. Clinicians likely have signs in the waiting room reminding you to get your vaccination, and once the season starts, cable news will certainly report on the severity of the virus this year.

Infectious mononucleosis (often referred to as simply mono) is the odd man out in this scenario. It certainly doesn’t have the bad boy reputation that the flu has and, unfortunately, there is no vaccine. Sometimes called the “kissing disease” because it is spread through saliva, mono is most often caused by the Epstein-Barr virus (EBV), a very common virus (though other viruses can also cause mono). In fact, before age 5, 50% of individuals are infected by EBV! So why does this disease sometimes fall, forgotten, through the cracks, undiagnosed and untested?

If that many are infected with EBV by such a young age, why don’t we see more cases of mono? Luckily, EBV infections in children typically do not cause symptoms, or the symptoms are quite mild. Thus, about 85% to 90% of adults in America and other developed countries have antibodies to EBV by the time they are 40 years old, though most of us don’t even know it. Adolescents, especially teenagers 15 to 17 years of age, and young adults are those most likely to develop the classic symptoms of mononucleosis. In less-developed nations, 90 percent of people become infected by age 2.

In fact, before age 5, 50% of individuals are infected by EBV!

For those that do fall prey after sharing a coffee or kissing a loved one, diagnosing mono can be a challenge—many of the symptoms are similar to those of other illnesses. Mono can mimic strep throat, the common cold, or even a sinus infection. According to Cleveland Clinic, the most common symptoms are fever, sore throat, and swollen lymph glands, but additional symptoms include fatigue, muscle aches, white patches in the throat, skin rash, headache, and a loss of appetite.

Rest, plenty of fluids, and acetaminophen or ibuprofen may be just what the doctor orders for mono, which cannot be treated with antibiotics. So what’s the point of getting tested if a little chicken soup and some extra sleep are all that are necessary?

That’s a rudimentary look at a disease that can still be dangerous in our modern age. If symptoms are severe, a doctor may recommend treating specific organ systems. Because the disease may cause an enlarged spleen, there’s a risk for a rupture. For kids, recent studies have found there’s an increased risk of systemic lupus erythematosus (SLE), multiple sclerosis (MS), rheumatoid arthritis (RA), juvenile idiopathic arthritis (JIA), inflammatory bowel disease (IBD), celiac disease, and type 1 diabetes. Of course, you also want to help prevent the spread of the disease, which is more challenging if you’re misdiagnosed.

While most people infected with mono once will not get sick again, it can recur in rare cases. There is also a rare but serious condition called chronic active EBV infection, which is characterized by persistent symptoms and a viral infection that lasts longer than usual after the initial mononucleosis diagnosis.

Because there’s no vaccine, and antibiotics don’t work against viral infections such as mono, treatment options are limited therefore knowing that one has mono is important to help patient care and reduce risk of further complications.

Because there’s no vaccine, and antibiotics don’t work against viral infections such as mono treatment options are limited

Some physicians may not always use a lab test to diagnose mononucleosis, instead working off the patient’s symptoms alone. But because mono can mimic other diseases, a confirmed diagnosis will help physicians avoid the use of unnecessary antibiotics and allow for appropriate recommendations and follow-up visits. 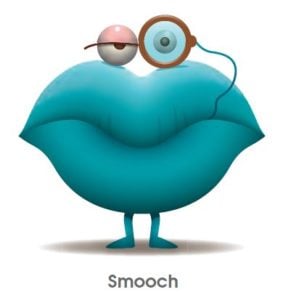 Most clinicians would like to confirm their clinical impressions, and a variety of laboratory tests have been developed and are used to make a more definitive diagnosis. These include a blood count showing  an increased number of lymphocytes, and/or a heterophile antibodies test which  is specific heterophile antibodies produced by the immune system in EBV infection.  Smooch, Sekisui Diagnostics’ mascot if you will, for our OSOM® Mono Test, looks rather grumpy—which is how family and friends would certainly feel if you or a loved one passes mono on to them because you didn’t have a confirmed diagnosis!

The OSOM Mono Test has no age limitation and produces results in five minutes! It boasts > 99% sensitivity and 96% specificity, and easy-to-read two-color results. Learn more here, and perhaps use Smooch to remind your customers or yourself to not let mono get lost in the plethora of strep throat and flu cases!