Strep A – More Than A Sore Throat?

Several years ago I took my young son to the doctor for a sore throat and was dumbfounded when he was diagnosed with scarlet fever. The same disease that 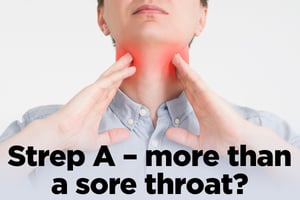 caused epidemics through the 19th and early 20th centuries? “That’s still a thing?” I remember thinking. And while scarlet fever is much less common than it was 150 years ago and can be successfully treated with antibiotics, the disease is in fact on the rise again after decades of decline. What do you know about this infection, and what should you know?

What is a Strep A Infection?

The bacteria called group A Streptococcus, or group A strep, are often found on the surface of the skin and inside the throat. They are a common cause of infection in adults and children. In general, group A strep infections are contagious and can be spread through coughs or sneezes, or through direct contact with an infected person or contaminated object. Group A strep can cause minor infections including strep throat, tonsillitis, impetigo; and more serious infections such as scarlet fever, rheumatic fever, necrotizing fasciitis, and post-streptococcal glomerulonephritis.

Most people with a minor strep A infection will make a full recovery and experience no long-term problems. There is, however, a very small risk that the infection could spread further into the body or lead to complications such as rheumatic fever if left untreated. Invasive infections can include pneumonia, sepsis, meningitis, and toxic shock syndrome.

Scarlet Fever: Diagnosed by More Than a Rash

Left untreated, strep throat caused by group A Streptococcus can develop into scarlet fever. Signs and symptoms include a sore throat, red rash, flushed face, “strawberry” tongue, a fever of 101 degrees or higher, difficulty swallowing, enlarged glands, nausea or vomiting, and headache. Scarlet fever can occur in people of all ages, but is most common among children 5 through 15 years of age.. A physical exam and a throat swab are necessary for diagnosis.

Both Strep A infections and scarlet fever are treated with antibiotics. For Strep A infections, antibiotics will shorten the duration of symptoms, reduce the likelihood of transmission to other people, and prevent the development of complications, including acute rheumatic fever. The same benefits are seen when antibiotics are used to treat scarlet fever. Typically penicillin or amoxicillin are used to treat scarlet fever and there has never been a report of a clinical isolate of group A strep that is resistant to penicillin.

Scarlet Fever on the Rise

You may have heard that diseases such as the measles and pertussis are on the rise here in the U.S. and elsewhere, but those diseases are preventable and recent outbreaks are attributed to vaccine refusal. So far, doctors have not been able to identify the reason for the recent resurgence of scarlet fever.

A recent report from scientists found that a new strain of group A Streptococcus, which is able to produce significantly more toxin, is spreading in England and Wales. This new strain, which is able to produce nine times more toxin (Streptococcal pyrogenic exotoxin A) than the previous version, coincides with a rise in rare invasive infections, but does not account for a surge in scarlet fever cases during the past five years. There is also no evidence that the toxin is causing the invasive cases of the disease. The most recent report, dated May 2019, found that there were 1,500 invasive cases in England in 2018-19, which is 8% higher than the average for the previous five years.

As of September 2019, this new strain has mostly been confined to the UK, with one case in Denmark and another in the U.S. However, the rise in cases of scarlet fever and a worrying new strain is bound to make everyone uneasy.

Additionally, the careful management of antibiotic consumption is crucially important in an age of increasing resistance for some pathogens and the lack of new antibiotics being developed. Accurate diagnosis is essential for proper treatment and to also avoid the use of antibiotics when it’s not indicated. 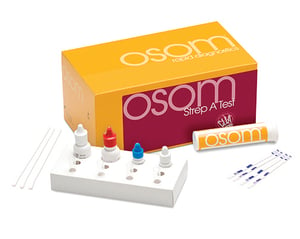 Sekisui Diagnostics offers the OSOM® Strep A Test, a color immunochromatographic assay intended for the qualitative detection of Group A Streptococcus antigen directly from throat swab specimens. It offers easy-to-read two color results with 96% sensitivity and 98% specificity versus culture.

Ultimately, scarlet fever is typically mild and treatable—with proper identification and management, the majority of cases will bounce back quickly just as my son did.

sore throat, strep a
The Global Impact of RSV
Getting Smart About Obesity

Turning the Tide on Presenteeism