Climate change: A matter of health 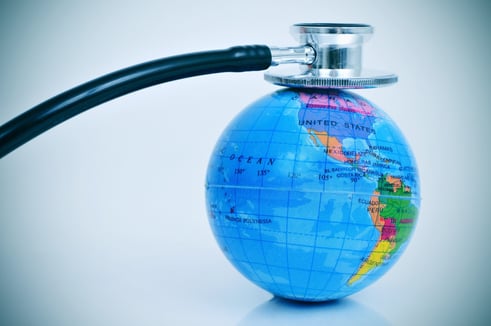 In the last 130 years, the world has warmed by approximately 0.85C, according to the World Health Organization. Each of the last three decades has been successively warmer than any preceding decade since 1850. Sea levels are rising, glaciers are melting and precipitation patterns are changing. Extreme weather events are becoming more intense and frequent.

But climate change isn’t an abstract geopolitical issue. It is a threat to the health of people around the world.

Climate is one factor that influences the distribution of diseases borne by vectors, such as fleas, ticks and mosquitoes. It contributes to torrential downpours, which increase pathogen load in municipal drinking water systems and contribute to outbreaks of waterborne diseases. Between 2030 and 2050, it is expected to cause approximately 250,000 additional deaths per year from malnutrition, malaria, diarrhea and heat stress.

At the opposite end of precipitation extremes, drought can have a serious impact on health, agriculture, economies, energy and the environment. An estimated 55 million people globally are affected by drought every year, and droughts are the most serious hazard to livestock and crops in nearly every part of the world. Drought threatens people’s livelihoods, increases the risk of disease and death, and fuels mass migration. Water scarcity impacts 40% of the world’s population, and as many as 700 million people are at-risk of being displaced as a result of drought by 2030.

Health problems caused by air pollution, food and water insecurity, and natural disasters are among the issues that the Health and Environment Adaptive Response Task Force (HEART) hopes to see taught.

Extreme heat exacerbates common illnesses, including asthma, diabetes, renal insufficiency, and infectious gastrointestinal diseases. Maternal exposure to extreme heat during pregnancy is linked to premature birth, low birth weight, and congenital anomalies. Some patients with mental illness are especially susceptible to heat. Suicide rates rise with high temperatures, suggesting potential impacts from climate change on depression and other mental illnesses. In addition, patients with severe mental illness, such as schizophrenia, are at risk during hot weather because their medications may interfere with temperature regulation or even directly cause hyperthermia.

Despite the fact that the World Health Organization in 2018 recognized that climate change was the biggest threat to global health of the 21st century, a recently published survey from the International Federation of Medical Students’ Associations (IFMSA) found that climate change is taught in only 15% of medical schools worldwide. In 12% of the medical schools, climate health teaching activities are led by students and not faculty members. (This data comes from three global surveys spanning 2,817 medical schools in 112 countries.) However, medical schools and societies are making efforts to help current and future healthcare providers recognize and address the health impact of climate change.

Medical students across Canada, for example, are pushing for a greater emphasis on climate change in medical education. Health problems caused by air pollution, food and water insecurity, and natural disasters are among the issues that the Health and Environment Adaptive Response Task Force (HEART) hopes to see taught.

The American Medical Association has gone on record supporting the teaching of climate change in undergraduate, graduate, and continuing medical education such that trainees and practicing physicians can 1) acquire a basic knowledge of the science of climate change, 2) describe the risks that climate change poses to human health, and 3) counsel patients on how to protect themselves from the health risks posed.

In September 2020, the Association of American Medical Colleges issued “Climate Change and the Practice of Medicine: Essentials for Resident Training. “Knowledge of the pathways that link climate change and health will enable residents to integrate patient- and location-specific climate risks into more effective disease prevention and treatment plans,” wrote the authors. Physicians also can provide guidance on lifestyle choices that not only improve individual health in the near term, but collectively reduce greenhouse gas emissions and help secure public health gains in the long term.

The Harvard T.H. Chan School of Public Health in Boston, Massachusetts, operates Climate MD, a program to help medical professionals understand that climate change can: 1) affect the risk profile of the medications they prescribe, 2) disrupt availability of essential supplies and medicines, 3) affect the diseases they need to treat and 4) undermine their ability to do their jobs.

Are We Too Late?

Speaking to Kaiser Health News in September 2020, Dr. Jonathan Fielding, co-director of the Center for Healthy Climate Solutions at UCLA’s Fielding School of Public Health in Los Angeles, California, drew a parallel between climate change and COVID-19. “Even though many of us predicted a pandemic, most people didn’t really believe it, the government didn’t prepare well for it, and we’re learning the same thing with climate change,” he said. “The difference is, we have a way, through vaccination and maybe drugs, to reverse what’s going on with COVID. We don’t know that we have the ability to do that with climate change.

“You have people politicizing it and calling it a hoax, and that, unfortunately, is very detrimental to what we all want, which is to have a habitable planet.”