As some readers may recall, last year we ran a series about the Medicare Access and CHIP Reauthorization Act, or MACRA, which was signed into law in 2015 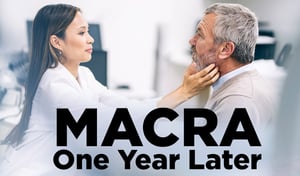 and went into effect in 2017. But the story, much like that never-ending heap of laundry sitting at home, is ongoing. On November 1, 2018, the Centers for Medicare & Medicaid Services (CMS) released its final rule governing its Medicare Quality Payment Program in 2019. That rule went into effect on January 1.

What’s that? You don’t recall what the Quality Payment Program, or QPP, is? Well, to be fair, we did throw a lot of acronyms and new information at you last year!

MACRA is a major shift toward value-based care and away from fee-for-service (FFS). It offers a two-track payment system called the Quality Payment Program (QPP): one track is the Merit-based Incentive Payment System (MIPS), and the other is Alternative Payment Models (APMs). The goal is to transition Medicare payments to a program based on the quality and value of services provided. The QPP was created with two paths to assist providers in more quickly transitioning to a system that promotes value and quality.

In January 2019, providers were required to enter either the MIPS track or the APM track—the majority of physicians were expected to take the MIPS track. Performance in 2019 determines Medicare Part B payments in 2021, and the maximum payment adjustment amount for the 2021 payment year is +/- 7 percent.

For a more in-depth refresher, check out “Making Sense of MACRA” parts one, two, and three.

One major change providers should be aware of are exemptions. Previously, providers were exempt from the QPP only if they met one of two criteria: they provide $90,000 or less in Medicare Part B charges for covered professional services, or they care for 200 or fewer Medicare beneficiaries. New in 2019, providers can claim exemption if they provider 200 or fewer covered professional services under the Physician Fee Schedule.

As you can see, the weight of the Quality category decreased, while the weight of the Cost category increased in 2019. The Promoting Interoperability and Improvement Activities category weights remained the same, though the Interoperability bonus removed. While physicians wanted a 90-day reporting period for the four categories, the final rule set the Quality and Cost categories with 12-month reporting periods, and the other two categories at 90-day periods.

CMS also added a bonus for providers that treat large numbers of medically complex patients and those with unmet socioeconomic needs. These points will be assigned based on risk adjustment methodologies and the ratio of individuals also eligible for Medicaid to all patients. The agency increased the allowable bonus from three points to five, which is the same as the payment made for small practices.

In 2019, additional types of providers are MIPS-eligible, including physical or occupational therapists, speech-language pathologists, audiologists, clinical psychologists, and dietitians/nutrition professionals.

We focused more on MIPs because the majority of providers follow that track. However, some changes were made to APMs that are important to note.

A little background is necessary to understand how Alternative Payment Models work—providers who participate in advanced APMs at certain levels, known as Qualified Practitioners (QPs), are excluded from MIPS. Beginning in 2019, clinicians can qualify as QPs with participation in advanced models managed by payers other than Medicare. These alternatives have certain standards, including certified electronic health records, comparable quality measures as MIPS, and bearing of more than nominal financial risk.

To learn more about APMs, visit the CMS resource.

(Not) Keeping it Short & Simple

The one thing the MACRA final rule did not do was simplify the process! There are hundreds of thousands of pages of resources, guides, handy graphs, and more available with a simple Google search, and we’ve merely covered the tip of the iceberg here.

There are many resources available that delve further into the MACRA final rule—the best place to begin is CMS.