PSA: To Screen or Not to Screen? That is the Question

There are certain milestones in life that no one looks forward to—having your wisdom teeth pulled. That first mammogram! At the top of the list for men is likely 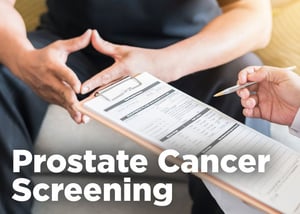 That being said, prostate cancer often can be treated successfully. In fact, the localized and regional five-year survival rates for this type of cancer are near 100%! As with all cancers, early diagnosis is important. Most prostate cancers are first found during screening with a prostate-specific antigen (PSA) blood test or a digital rectal exam (DRE). While prostate cancers usually don’t cause symptoms in the early stages, more advanced cancers are sometimes first found because of symptoms they cause.

So why are there ongoing controversial discussions about PSA screening? Why do the United States and Europe hold different positions regarding some aspects of screening?

So What’s the Deal?

How can one argue that it’s better not to screen for a cancer? The medical community is divided due to the risk of overdiagnosis and overtreatment. Cancer overdiagnosis is the detection of cancer that would not develop any symptoms during a man’s lifetime if not identified by early detection or not result in cancer-related death. Overtreatment refers to unnecessary medical interventions, including extensive treatment for a condition that requires only limited treatment.

According to the European Association of Urology, the risk of overdiagnosis has been estimated to be as high as 40% in screen-detected prostate cancer, leading to unnecessary biopsies and

Practitioners in both the UK and the U.S. were advised not to perform PSA for early detection. Two independent studies performed in 2017 and 2018 found that a lack of prostate cancer screening may be reversing the trend of declining death rates—meaning mortality from these type of cancer could be on the rise. This year, the European Association of Urology made a call to action, stating, “Urgent action is required to ensure the new Commission is mandated to support EU Member States in prostate cancer screening in their national cancer plans.”

EAU Policy Coordinator Michelle Battye wants the 2003 Council Recommendations on population-based screening to be “urgently reviewed,” with prostate cancer added to the list of cancers to be addressed, and wants member states to bring good practice on prostate cancer screening to the Steering Group on Health Promotion, Disease Prevention and Management of non-communicable diseases.

How the U.S. Responded

The consequences of decreased PSA screening are numerous:

So do the risks of prostate cancer screening outweigh the benefits? That’s not a question any man should answer alone—he should discuss the pros and cons of screening with his doctor to make an informed decision. However, physicians should bring this topic to the table at the appropriate time for all affected patients.

In the end, prostate cancer screening is important, as it is with all types of available cancer screenings. A little bit of research can inundate you with statistics, recommendations, and lots of other frightening material. What matters is that physicians are aware of recommended guidelines and available screening and treatment options, and that patients are given the information they need to make informed decisions regarding their health.

Sekisui Diagnostics offers two tests (please note that only one is currently available in the U.S.). The FastPack® IP Total PSA immunoassay is a chemiluminescent immunoassay for the in-vitro quantitative determination of PSA in human serum and plasma as an aid in the management of patients with

The FastPack® IP Free PSA Immunoassay, not currently available in the U.S., is a chemiluminescent immunoassay for the in-vitro quantitative determination of free prostate-specific antigen (free PSA) in human serum. It is designed for use in conjunction with the FastPack IP System for calculating the ratio of free/total PSA, expressed as a percentage (percent free PSA). A free PSA test can be used instead of a biopsy if PSA levels are slightly elevated, and may be used to determine how aggressive a recurring cancer is.

Men's Health
Drugs-of-abuse Testing: Qualitative vs. Semi-Quantitative
Diagnostic Product Support: Not All Service is the Same