Antimicrobials have played a pivotal role in public health. Their main purpose is the synthesis of the bacterial cell walls in bacteria (e.g., streptococci) or the 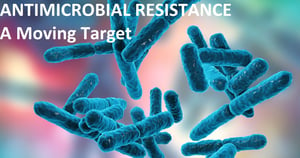 reverse transcriptase used by viruses (e.g., human immunodeficiency virus [HIV]). Some healthcare associated infections (HAIs) cost the healthcare industry billions each year due to their difficulty to treat. The same drugs that were once used to treat such infections have lost much of their utility, allowing for the spread of Antimicrobial Resistant (AMR) pathogens.

The Pendulum of Antimicrobial Resistance

The use of antibiotics, an antimicrobial agent targeted towards bacteria, burst into prominence during World War II. Wound sepsis was a leading cause of death and disablement among military personnel and the need to develop rapid therapeutics against infections was needed as the world entered into conflict. Hence, a large amount of attention into the recent discovery of a novel antibacterial agent, penicillin, was paid. In hindsight, the broad and medically unsupervised use of penicillin in the war theatre was an early and then, unknown push of the lever towards AMR.

The Misuse of Antimicrobials

The efficacy of antimicrobials, particularly antibiotics, has led to their overuse and misuse. Whenever antibiotics are used, a selective pressure is applied, and the bacteria that escape that pressure can then proliferate or transfer the resistance gene. This can occur when antibiotics are taken during a virus infection. Antibiotics are meant to target bacteria, and therefore have little-to-no effect when it comes to viral infections. The same scenario can be true when antibiotics are incorrectly used during an allergy or for other non-bacterial agents. It is critical that physicians and others with the authority to prescribe antibiotics should do so based on a confirmatory medical laboratory tests and antibiotic susceptibility panels.1

Urbanization and International Travel as Drivers for AMR

Accelerating the spread of AMR pathogens is a compaction of the human population into large metropolitan areas, or urbanization. This can be a breeding ground for pathogens. One of the best examples of a high human density pathogen is Mycobacterium tuberculosis (Mtb). Mtb is the causative agent for tuberculosis, in which Mtb colonizes the lung and is spread from human to human by coughing.

Approximately one third of all deaths attributed to Mtb infections are linked to AMR.2,3 A particularly worrisome development of Mtb is a class termed “extensively drug resistant,” in which the bacteria has developed AMR to a number of antibiotics.4, 3,5-9  This typically arises through the misuse of prescribed antibiotics, in which the patient skips a treatment or does not finish their antibiotic regiment, allowing the flourishing of bacteria that were not immediately killed.

Along with the increase in urbanization, it is impossible to ignore the effect of accessible and rapid interstate, intercountry, and intercontinental travel on AMR.

Not every pathogen to humans is exclusively transmitted from human to human. Many pathogens sustain enzootic cycles of transmission such rabies (rabies virus), lyme disease (Borrelia bacteria), and the plague (Yersenia pestis). The ability for a pathogen to maintain an enzootic cycle creates a number of barriers for health professionals in terms of how to treat the disease. However, when the disease is cleared from the population, it still can maintain a cycle of transmission outside of humans and continuously spill over into the human population at a later time.

Where to go from here

According to a recent report by the World Bank Group, drug-resistant infections have the potential to cause a level of economic damage similar to, and likely worse than, that caused by the 2008 financial crisis. Overall, it estimates a global economic impact of $100 trillion dollars and a human impact of 10 million deaths.10  A recent study by the University of North Carolina concluded that individuals who did not get vaccinated against the most common preventable diseases cost the U.S. economy >$7 billion per year, with the flu contributing the largest portion of this.11

The rise and spread of AMR pathogens is not going to cease. As long as there are antimicrobial pressures, pathogens will continue to adapt. To that end, many resources are being paid to the development of novel antimicrobials. Moreover, vaccine development continues to be a priority for several of the infectious diseases we’ve outlined above and many others. Like the very AMR pathogens we are fighting, we must all become better at evolving and adapting our approaches in a more timely and urgent manner.