The British In Vitro Diagnostics Association (BIVDA) recently highlighted attention in Europe on the subject of antimicrobial resistance (AMR). [NOTE: the BIVDA Weekly Update is behind a members-only firewall.] 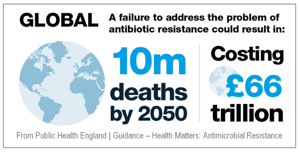 In their newsletter, BIVDA shared a link to an article from the Financial Times [also behind a paywall] which coincided with the G20 meeting. The FT article noted that AMR was expected to come up as an issue during discussions on health.

AMR is not a new issue for Sekisui Diagnostics. We’ve discussed AMR and the role Sekisui and its distributors have played in supporting initiatives to reduce antibiotic consumption.

“Today the Commission adopted a new Action Plan to tackle Antimicrobial Resistance (AMR) – a growing threat that is responsible for 25,000 deaths and a loss of €1.5 billion in the EU every year.”

How critical an issue is AMR?
|Worldwide, nearly 700,000 people die annually due to an antibiotic resistant infection. AMR is responsible for an estimated 25,000 deaths in the EU alone. Europe – like many other global regions – is taking it very seriously.

According to Vytenis Andriukaitis, Commissioner for Health and Food Safety, by 2050 AMR could lead cancer as a cause of death if government fails to take action.

The new Action Plan focuses on everyone in the medical or healthcare communities involved in the use of antimicrobials – including nurses & doctors, pharmacies, hospital administration and others. The guidelines are intended to work in conjunction with existing national infection prevention & infection control guidelines in European member countries.

One key aspect of the Action Plan involves surveillance efforts – including use of diagnostics – to improve public health while reducing the misuse of antibiotics. This also includes the research into - and development of - novel diagnostics:

“Novel, rapid and reliable diagnostics are crucial for differentiating between bacterial and viral infections and identifying AMR, so that the most appropriate treatment can be given in a timely manner. By tailoring the treatment to the nature of the infectious pathogen and its resistance pattern, diagnostics help reduce the unnecessary use of antimicrobials in humans and animals. Such novel diagnostics are in the process of entering the market but more tests are needed to guide a more efficient use of existing antimicrobials in the human and animal health sectors. Novel diagnostics will also make it possible to recruit the right patients in clinical trials for new treatments, making the trials more efficient.” [European One Health Action Plan against Antimicrobial Resistance - page 15]

Want to learn more? You can read the EC Action Plan here (pdf file), or learn more about antimicrobial resistance at the European Commission Health and Food Safety website.

Clinical Chemistry: Why Pour Over?
Quantifying the Value of Diagnostics: An AdvaMedDx Overview