Plan Ahead For the Flu- How Physician Practices Can Avoid Shortfalls 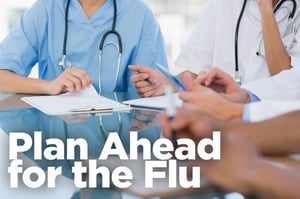 A record-breaking season! The perfect storm! No, we’re not talking about the movie that garners a mediocre 47% Rotten Tomatoes rating. If you recall, . A particularly vicious strain, combined with other factors such as a flu test shortage and a less effective vaccine, which resulted in 30,429 laboratory-confirmed flu-associated hospitalizations in the U.S. Other parts of the world saw staggering numbers as well: North Korea reported more than 80,000 confirmed cases of the influenza strain H1N1 between December 1, 2017 and January 16, 2018; Japan saw almost three million cases by January 2018; and Britain experienced a severe season with a sharp increase in hospitalizations.

We all breathed a sigh of relief when the flu season ended. In just a few short months, the flu and the need for a vaccination will begin to creep back into the public’s thoughts. All those who were adversely affected last season, physicians who experienced shortages and an overload of patients, will surely want to avoid those same pitfalls. So what can we all do to prepare now?

Keep Your Eye on the Land Down Under

Fun fact: because Earth’s axis is titled, Australia experiences winter while those of us in the U.S. experience summer. Their flu season typically wraps up, just as ours is getting started. Meaning it can serve as a gauge for how severe our season here may be. If Australia sees a particularly rough flu season, you may want to prepare for an intense season here as well.

Flu season  will begin in the Fall for 2018/2019, but that doesn’t mean you should stick your head in the sand! In fact, the upcoming season represents the 100-year anniversary of the 1918–1919 influenza pandemic, which was the most severe pandemic ever recorded!  A lot has changed in 100 years. It’s important to keep abreast of the news, guidelines, and trends. The FDA has already recommended which strains should be included in the 2018/2019 flu vaccine.  In addition, health officials are researching alternatives to egg-based flu vaccine production, which have reportedly been linked to the low effectiveness of the flu shot. Earlier in 2018, FDA commissioner Scott Gottlieb said that a cell-based flu vaccine may be more effective than an egg-based vaccine. However, most manufacturers continue to produce egg-based vaccines.

The CDC maintains an entire website devoted to the flu, no matter what time of year. It offers domestic and international news, resources, and information for providers.

Don’t Put It Off Until Tomorrow!

I’m sure you’re familiar with the saying—"don’t put off until tomorrow what you can do today!” While it may have elicited eye rolls when your mom or grandfather spouted it off, it is good advice. Consider the following to avoid some of the problems you may have experienced last year:

With the fear of changing strains, new technologies are more important than ever. You have options, but it’s important to educate yourself! Manufacturers like Sekisui Diagnostics are trying to provide new options to keep up with flu diagnostic challenges—learn all you can to prepare now for the upcoming flu season!